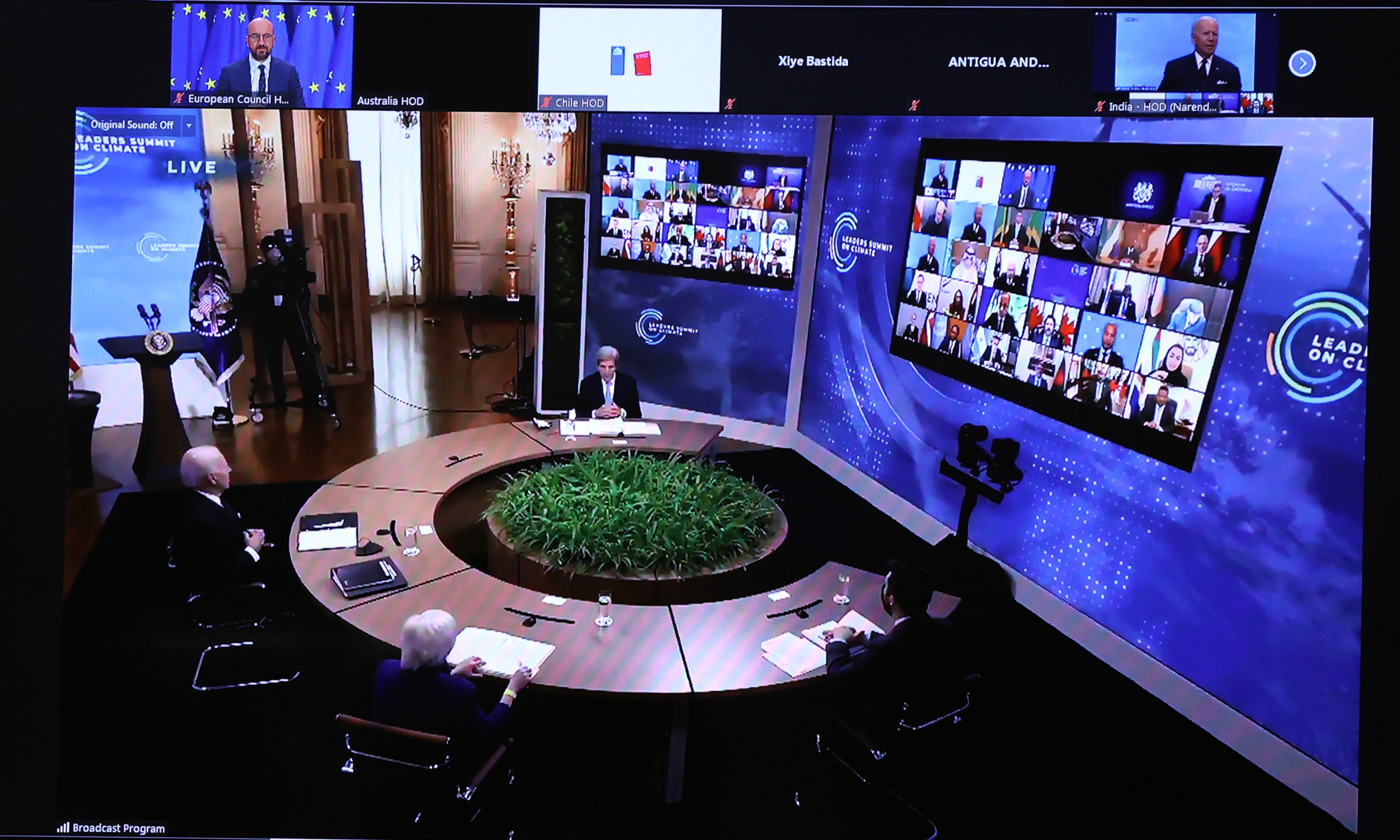 The U.S. is almost back in the world’s climate mainstream.

On Thursday, President Joe Biden announced the U.S. would slash its greenhouse gas emissions by 50 percent to 52 percent by 2030, in a bid to reclaim the climate leadership role shredded by Donald Trump.

The target brings the U.S. closer to the EU, which on Wednesday agreed to enshrine its pledge to cut net emissions by 55 percent by 2030 and to become climate neutral by mid-century into a Climate Law.

Some leaders made promises, some just made speeches during the first day of Biden’s virtual global leaders’ summit, with those vows falling short of what’s needed to bring global warming under control.

“Today’s summit shows the tide is turning for climate action, but there is still a long way to go. To avert a permanent climate catastrophe, we must now urgently build on the momentum delivered today, in this make-or-break year for people and planet,” U.N. Secretary-General António Guterres said following speeches from dozens of world leaders.

Here’s what happened on Day 1 of the two-day summit:

One of the simplest ways for the Biden administration and Europe to get buy-in from Asia, Africa and Latin America is to help fund small and poor countries to fortify themselves against the effects of climate change.

Leaders from Turkey to Brazil, Bhutan to Gabon, cajoled and castigated rich countries for failing to live up to their promise of supplying $100 billion a year in climate finance.

Hammered by the twin crises of climate change and COVID-19, some leaders, including Antigua and Barbuda’s Gaston Browne, asked for debt relief. “We are literally teetering on the edge of despair,” he said.

Biden promised to more than double the U.S. government’s international finance commitments, without providing specific numbers. His climate envoy John Kerry said Tuesday that the administration plans to go well beyond an initial $1.2 billion commitment to a Global Climate Fund, to which the U.S. is $2 billion in arrears.

Coal remains the world’s biggest electricity generator — and biggest greenhouse gas polluter — by a stretch, so stopping coal’s growth and phasing it out was a major theme of the summit. It’s still growing in many big Asian economies; the U.S. and European countries like Germany and Poland still burn coal, but in falling amounts.

China said it would “control” coal power growth through to 2025 and phase it down in the later part of the decade — China’s first explicit promise to lower its reliance on the fuel. David Vance Wagner, a vice president at the Energy Foundation China, said it sent “a clear and important political signal domestically.”

South Korea, the second-largest international public financier of coal, said it would cease its exports immediately. But neither Japan nor China answered entreaties from the U.S. to do the same.

The U.S., Japan, Canada and South Africa were the only countries to explicitly set new goals for their emissions this decade.

The U.S. exceeded what most advocates had asked for. Japan, meanwhile came in under expectations at a promised 46 percent cut , with a wave at trying to get to 50 percent. South Africa said its emissions would peak by 2025. Canada increased its 2030 goal to an emissions cut of 40 percent to 45 percent.

The EU is betting on carbon pricing, and plans to extend emissions trading beyond the power and industry sectors to transport and buildings, European Commission President Ursula von der Leyen announced.

Canada is on board, according to Prime Minister Justin Trudeau. Carbon prices will go up to as high as $170 per ton of CO2 by 2030 to help reduce emissions, he said. Russia is also experimenting with carbon pricing and trading measures, Vladimir Putin said at the summit.

French President Emmanuel Macron said: “If we don’t set a price for carbon,” there will be no clean energy transition.

But it’s not the case everywhere.

Australia junked its carbon tax in 2014 and refuses to reconsider the matter, while the U.S. has no federal plan to set a carbon price.

Open for business (within limits)

Going big on climate is good for the planet, but also good for business. What once was a speaking point, desperately pushed by business-friendly NGOs and green companies, has become mainstream. “This is a moral imperative, an economic imperative. A moment of peril but also a moment of extraordinary possibilities,” Biden said.

Fighting climate change is about growth and jobs, said U.K. Prime Minister Boris Johnson: “Cake, have, eat is my message to you.”

But not everyone is jumping on the green capitalist bandwagon.

“India welcomes partners to create templates of sustainable development in India,” he said. But he added: “I want to emphasize the importance of lifestyle change in climate action. Sustainable lifestyles and [the] guiding philosophy of ‘back to basic’ must be an important pillar of our economic strategy for the post-COVID era,” he said.

America’s word isn’t what it used to be

The U.S. government finds itself in an unfamiliar position mid-way through its climate summit: trying to deploy the moral authority and financial heft needed to assume global leadership while struggling to shed Trump’s legacy.

There were reassuring noises from some.

“We’re all so delighted to have the United States back,” said Cyril Ramaphosa, South Africa’s president, while Italian Prime Minister Mario Draghi described the new negotiating atmosphere as a “complete change” from the Trump administration.

But many governments no longer accept U.S. climate commitments at face value.

The Chinese government — which last week agreed to work with Biden to get climate change under control — has been particularly scathing. “The U.S. chose to come and go as it likes with regard to the Paris Agreement,” Chinese foreign ministry spokesperson Zhao Lijian said.

JPMorgan Could Launch Bitcoin Fund as BTC Price Bounces Back

A despot’s time to face democracy