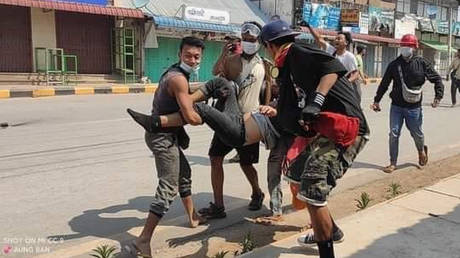 Seven people have died in Aungban town, southern Shan State, on Friday as more than 100 police and soldiers confronted anti-coup protesters. Another died of their wounds having been taken to a nearby hospital in Kalaw.

On Friday morning, a strong police presence arrived in Aungban as demonstrators began to gather in the town to protest against Myanmar’s ruling junta which took power in a military coup on February 1.

Local news agency Myanmar Now reported that security forces began firing around 9am and that a number of demonstrators had died immediately. A funeral business told the portal that those who died in the town were taken away by police.

Another video posted on Friday morning further highlights the heavy-handed approach taken by the authorities, as police can be seen throwing tear gas into a private residence.

Additional footage posted on Twitter shows local people attempting to treat an injured protester while gunshots can be heard in the background.


The country has been in a state of chaos since February 1, when the military seized power and imprisoned the nation’s leaders. The coup, which was justified by claims of fraud in the November 2020 election, has been widely condemned throughout the world and has triggered nationwide demonstrations against the military.

Myanmar’s military council has said it will hold elections and hand over control when an unspecified period of time has elapsed.

Mkhalele on how Jele and Hlatshwayo can work for Orlando Pirates