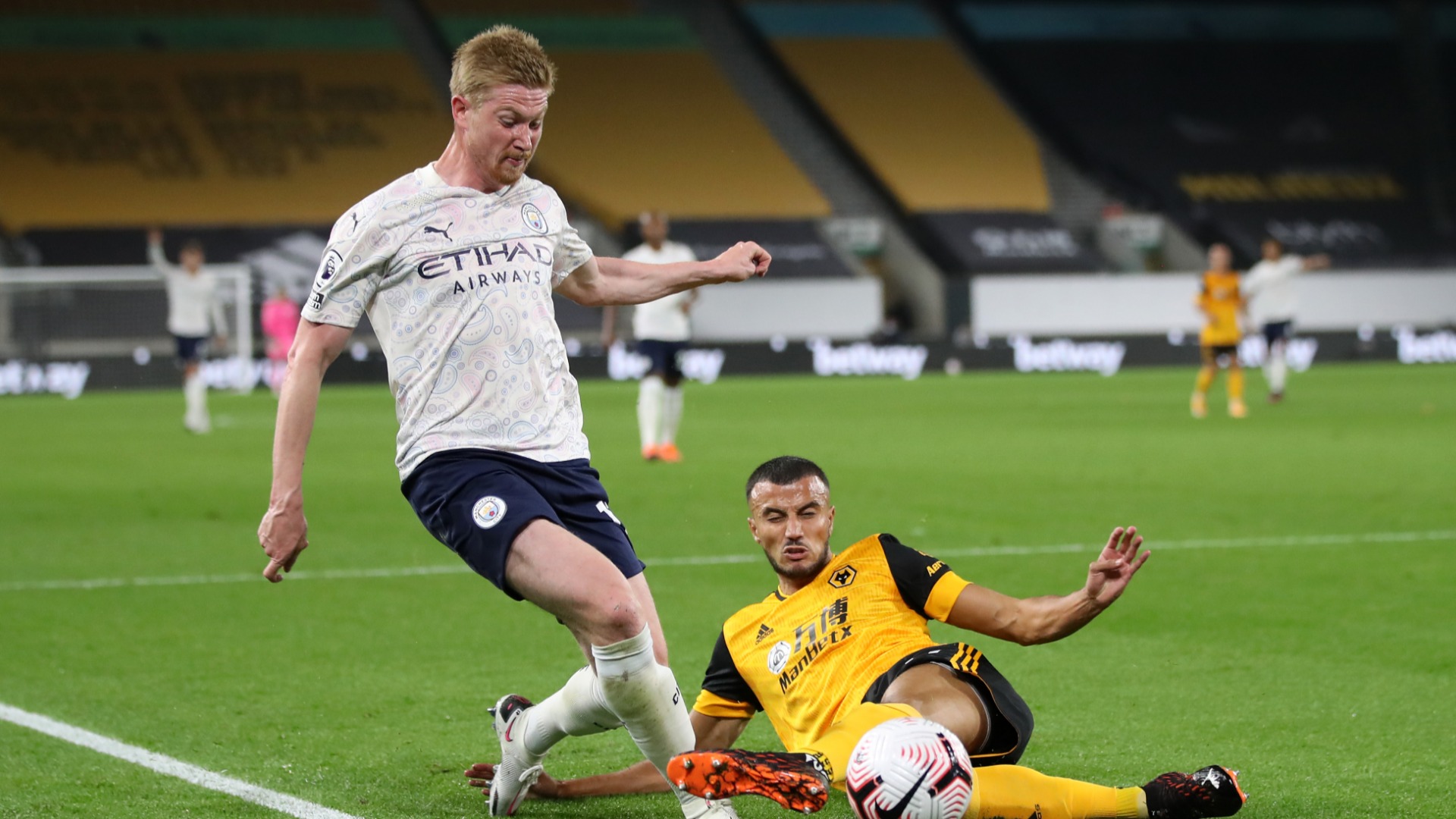 Kevin De Bruyne scored one and had a hand in two more as Manchester City came through a difficult second half to take the points at Wolves.

Kevin De Bruyne was typically influential as Manchester City survived a tough second half to defeat bogey side Wolves 3-1 in their Premier League opener at Molineux.

Pep Guardiola’s side – aiming to reclaim the title they lost to Liverpool last term – were featuring for the first time in 2020-21 due to their involvement in the previous campaign’s Champions League knockout stage.

But City made up for lost time in a dominant first 45 minutes on Monday as De Bruyne capitalised on a rash challenge to break the deadlock from the penalty spot, before Phil Foden added a stylish second.

Wolves, who did the double over City last season, enjoyed a better spell after the break and belatedly netted through Raul Jimenez, yet De Bruyne’s tackle in the final seconds allowed Gabriel Jesus to strike a deflected clincher.

In control from the outset, City were gifted the opener as Romain Saiss lunged in on De Bruyne just inside the right edge of the area, prompting a spot-kick the reigning PFA Players’ Player of the Year tucked away.

The visitors remained on the front foot and had their second 13 minutes before the break as De Bruyne fed Raheem Sterling, who cut a pass back for Foden to slide into the net.

Wolves came from two down to win the corresponding fixture last season, but De Bruyne could have put the result beyond doubt heading into half-time had the advancing Rui Patricio not blocked well.

There was improvement from Wolves following the restart, though, and Daniel Podence came to the fore, blasting past the top-left corner, surprisingly dummying for Ruben Neves to scuff a shot goalwards and then lifting a lob over Ederson’s crossbar.

Jimenez was uncharacteristically wasteful as he turned a low finish wide and his goal 12 minutes from time – courtesy of a powerful header from Podence’s cross – could not inspire an improbable rescue act.

What does it mean? City weather Wolves storm

This was not the fixture Guardiola would have picked to start the season, looking to avoid a third straight league defeat to the same opponent for the first time in his coaching career. City were without a host of key men, too, including Sergio Aguero and Aymeric Laporte, but De Bruyne’s class guided them to a precious early win, while debuts for Nathan Ake and substitute Ferran Torres also provided a boost.

City’s star man was as inspirational as ever as the new season got under way. De Bruyne won and then dispatched the penalty for the first goal – his third successful conversion from the spot in a row in the Premier League – and then played pivotal roles in the second and third, setting Sterling away for a rare assist before teeing up Jesus himself. No City player created more chances (six) or had more shots on target (four).

Laporte missed both defeats to Wolves last season and it was his absence that appeared most likely to prove costly on Monday. John Stones and Ake were the new centre-back pairing and they struggled to contain Podence in the second period, the winger contributing an assist among two key passes.

– City have now won 10 Premier League season-openers in a row, becoming the first team to achieve this in the competition.
– Jimenez’s goal on 78 minutes was Wolves’ first shot on target in the match and his sixth headed goal in the Premier League since the start of last season; no player has scored more in that time.
– Since the start of last season, De Bruyne has been directly involved in more Premier League goals (35 – 14 goals, 21 assists) than any other player, three ahead of Mohamed Salah who is second (32).
– Foden has been directly involved in 22 goals in 33 starts for City in all competitions (12 goals, 10 assists).
– Since the restart in June, Sterling has had a hand in 13 goals in 14 appearances for City (11 goals, two assists), with only Pierre-Emerick Aubameyang registering more in that time (14).

City host Bournemouth in the EFL Cup on Thursday, while Wolves are not in action again until Sunday’s trip to West Ham.

TSX joins global selloff, but here's where BMO's Belski thinks you should park your funds

Dollar lost for direction awaiting Fed to set its path

C.E.O. Pay Remains Stratospheric, Even at Companies Battered by Pandemic